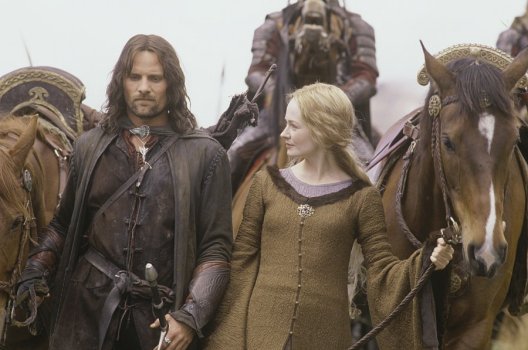 I was discussing movies with a buddy last night, and I had a thought. Which is leading to a question that I would like to ask my readers.

The thought specifically had to do with women in movies. I’ve talked a bit before about Lord of the Rings, and specifically Eowyn’s character. She is a very strong-willed woman who can hold her own in a fight. She deals with the most perilous of circumstances and should she perish in this war, she wants to go out fighting, to face death on her own terms. She also gets a good old fashioned “I am woman, hear me roar” moment when she kills the Witch-King, a villain so powerful that even Gandalf can’t stand up to him. The exchange goes something like this:

Witch-King: Fool, no man can kill me. Die now.

*Merry gets the jump on the Witch King and stabs him in the back of the knee, causing him to drop to his knees*
*Eowyn removes her helmet*

Witch-King: Crap, I didn’t think of that.

While I think she is a very good character in the LOTR saga and does a great job breaking up the otherwise sausage-fest of a cast, there was one thing about her character that seemed a bit odd to me. While she is a very strong female character, she seems to be lost without having a man to hit on. Seriously. She develops a crush on Aragorn, but he’s all like “Sorry, Liv Tyler‘s hotter and talks less, so I’m going to make out with her instead.” When Eowyn finally realizes that she can’t be with Aragorn, pretty much three scenes later she meets up with Faramir, and is like “I guess he’s kinda cute too” and gets cozy with him.

At this point in the conversation last night, I mentioned that I had a ton of respect for a movie starring Jodie Foster called The Brave One. Her boyfriend is killed in a mugging, and most of the movie is about her dealing with this trauma, to the point of getting a gun illegally and exacting vigilante justice. Kinda like Batman, but without the main character growling every line.

See, I respect The Brave One a lot because Jodie Foster’s character arc had absolutely nothing to do with her finding love. It seemed to me that with pretty much all female leads in every genre of film, a defining part of their storyline is tension over who they get to make out with.

When I made that point, two things occurred to me:
Hollywood is an extremely patriarchal system, and most movies starring women are not nearly as successful as those starring men.
Also, I don’t watch a ton of movies featuring a female protagonist.

So this is the question for you guys:

What other movies are there out there wherein the main female character’s storyline does not include tension over who she gets to make out with?