Harry Potter 6 and The Half Blood Prince 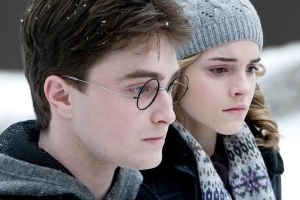 Harry Potter movies have been getting better and better over the years. David Yates directs his second Harry Potter film with the release of this movie, showing that he knows the genre well, and can tell a great story. David along with Michael Gambon, Daniel Radcliffe, Rupert Grint, and Emma Watson produce an amazing film.

I really liked this film. If anything I would be bold enough to say that I adored this movie. It was quite long and missing action that some of the previous films held, but what it lacked in spell casting and fire breathing dragons it made up for in some really beautiful dialog.

This movie showed that even our wizard friends have emotions, it’s what the movie excelled at. Perhaps I’m a hopeless romantic, but let me give you an example of what I mean. There was a scene in the movie where Hermione finds out that Ron has started a relationship with another girl. Distraught by the news she runs off to be by her self to cry and work out some of the feelings. Harry follows her after noticing that she was gone. The change from an ‘ok’ movie to a ‘good ‘of the movie happened here for me. The scene was laid out perfectly: jealously, hate, pain, and sadness come together, to show a teenager emotions, it was something I think we can all relate to. If a movie can make emotionally grab you and lead you through a rollarcoaster like Harry Potter did, it deserves my thumbs up.

The movie was well balanced for me. The viewers of this movie got to see a lot more of the school in this movie. It wasn’t even till 2 hours into the movie that Harry, Hermione and Ron were riding the train back to Ron’s house for the holidays. I liked this a lot. Although the movie differed from the movie by quite a bit, it brought back a lot of the book, painstakingly at times, letting us have more ‘Hogwarts’ than some of the previous films gave us. If you’re a Harry Potter Book fan, you will enjoy this movie.

Because of the action via dialog, and some of the extra scenes added to the movie from the book, the movie was quite long. Too long really. It really needed to be cut by another 20-30 minutes at least to save the viewer from having to get up for a bathroom break.

Harry Potter has captured my attention for more than 10 years now so I may be biased on the rating of this movie. I enjoyed the movie, and I would recommend it as a great buy.